About The Event Production Show

Mash Media own and run the Event Production Show (EPS). They are acknowledged as the leading UK publisher of magazines and directories for the events industry.

EPS is the UK’s leading exhibition for the live event sector, providing the largest buying forum for the events industry with hundreds of suppliers under one roof. There are also hundreds of buyers seeking to network and create new business relationships.

At the show you can expect to find event organisers from all areas of the industry, including concert promoters, festival organisers, production companies, corporate event planners, charity event organisers, experiential and marketing agencies, local authorities, government bodies, as well as event managers for events of all shapes and sizes.

Regardless of the event type, organisers all have one thing in common. They are looking for innovative event solutions to give them the best production values for their next event.

This year, the EPS took place at the Olympia in London from Wednesday 28th February – Thursday 1st March 2018.

Our experienced exhibition builders travelled down to London on Monday afternoon in preparation for the sales and marketing executives to be taking centre stage over the duration of the show. 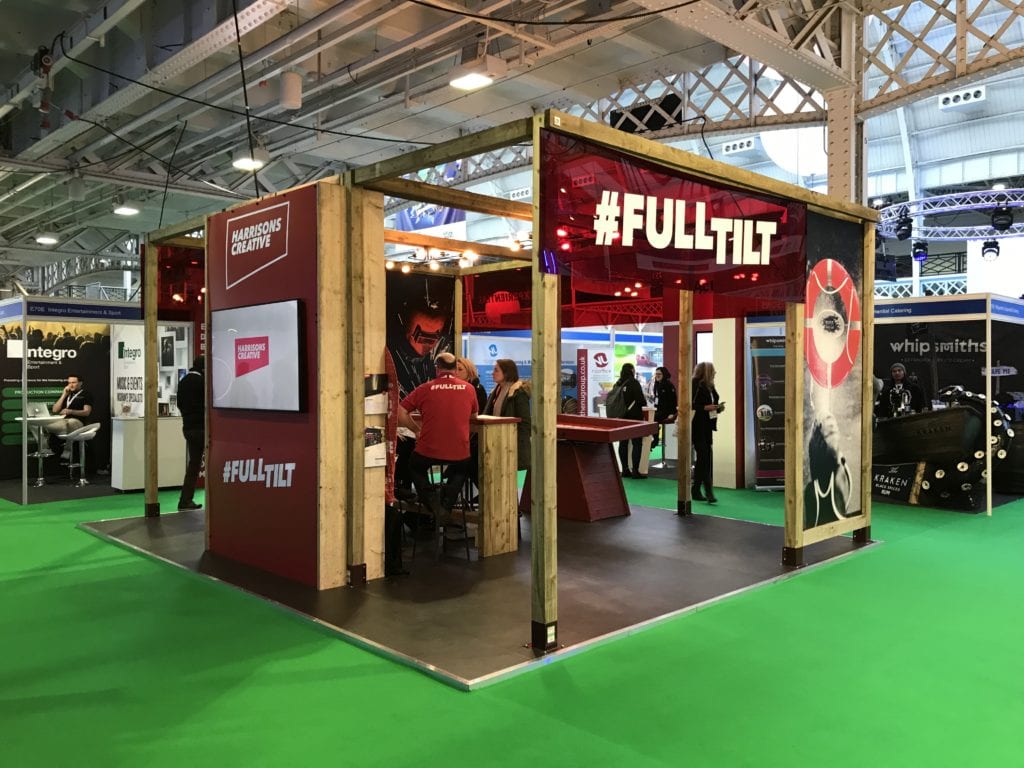 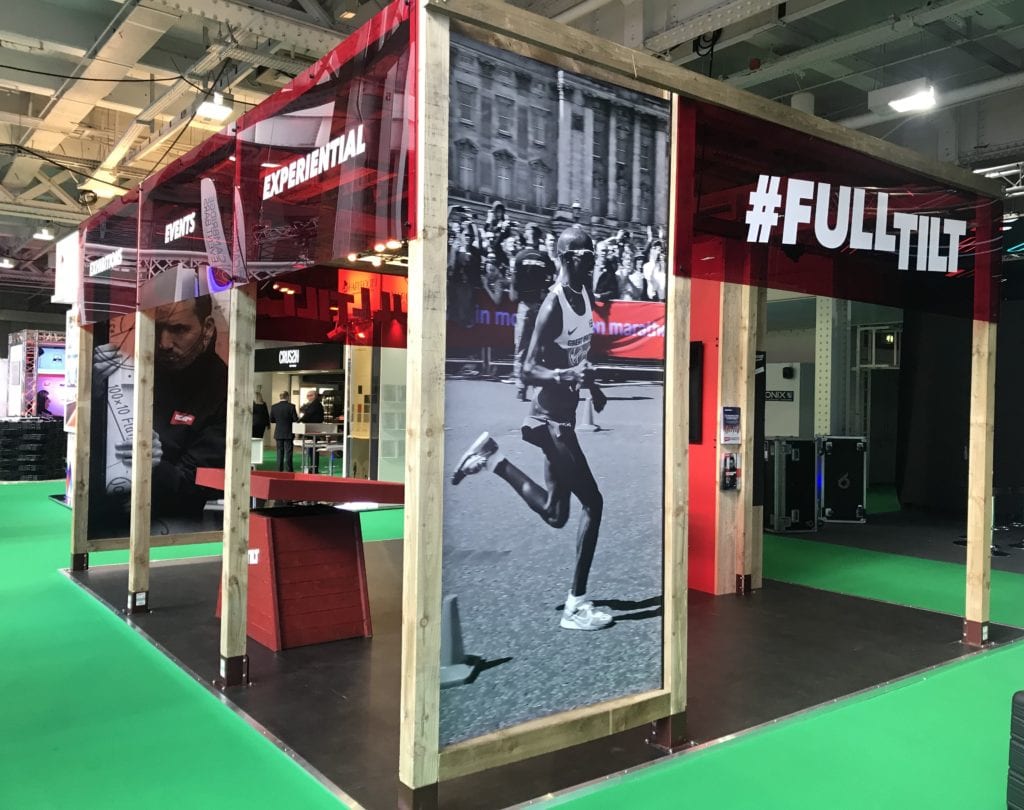 Made from reclaimed timber in-house, the stand was to be the focus of the show. Standing at 6m x 5m it would catch the eye of any passer-by. Mark, our exhibition designer and builder created the stand from scratch. He took it from initial concept and brief to the build and derigging at Olympia.

On Tuesday afternoon, our team set off on their trip, leaving behind a very snowy Darlington. After a lesson on deep sea diving and a game of no handies on the train (because why not try and walk down a moving train without holding on?!), we made it to London in no time.

We were up bright and early on Wednesday morning (fuelled by a Costa breakfast) for day one of the show. Although the bad weather was creeping in, we weren’t going to let it bring down the mood. We stood on stand D72E will our #FullTilt game raring to go.

To kick things off our team put their board tilting skills to the test where Caroline (our Sales Executive) took first position with 29s, followed by Simon (Head of Sales) with 41s and then a lousy 42s from Christie in our marketing department! 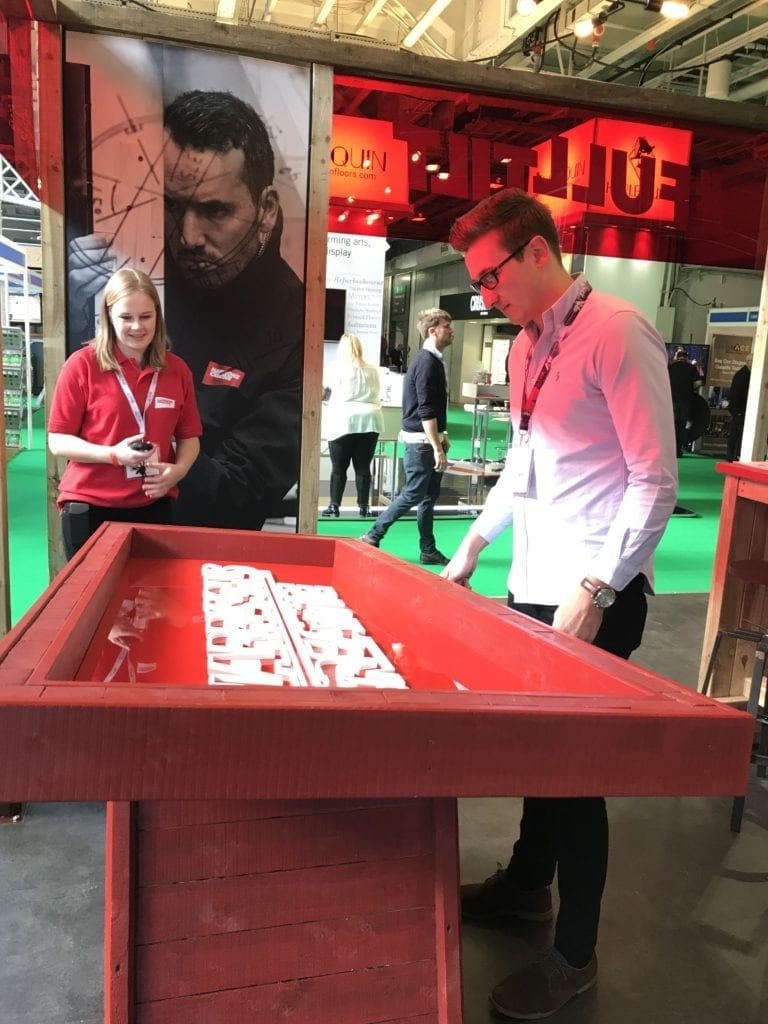 The idea behind #FullTilt was to roll the marble from the beginning of our logo through to the end. It may sound simple, but when you add a stopwatch into the equation, pressure levels go up and people start to crumble. You’d be surprised at how many people get competitive when they know a custom Bravura display stand is up for grabs. As the new and improved alternative to the roll up banner, it was a prize everyone wanted their hands on.

After a successful day, the team headed to the networking event at Tropicana Beach Club in Soho. After a five-and-a-half-hour train journey, James (our other Sales Executive) finally joined us. He missed the free food and drinks but at least he could take glory with Caroline in beating Simon and Christie at foosball (which was completely Simon’s fault…).

On day two, Simon and Caroline tackled the trains home leaving James and Christie to hold the fort. Once again, they had multiple strong leads and saw a lot of competition on the #FullTilt game. They even had a visit from Titan the Robot.

Overall the EPS was a huge success, giving us the opportunity to build new relationships and meet with suppliers. Most importantly, we were able to showcase our capabilities.